Bobby Brown (my Papa). A tribute to a True Blue.

My papa was the longest living footballer and International football manager in the UK. He was my paps, my friend, a football legend and my hero. He'll be sadly missed by many, and never forgotten by the SFA. RIP Paps 1923-2020. 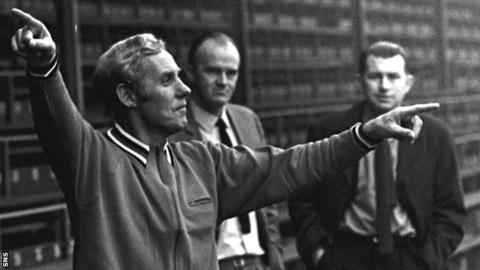 On 15 January 2020, Scotland lost a legend. A football icon. He was 96 and would have turned 97 in March. Yet he didn’t look a day over 80. 70 even. Sadly, in his last few days he wasn’t the Paps I recognised. But I’d rather not dwell on that. This is a celebration of one of the most active, witty and charismatic men I’ve ever known – my Papa, Bobby Brown.

I was his eldest grandson, but more a son, as he never had a son of his own. After his passing we had to clear his house – we found previously unseen photos, news clippings, scrap books, diaries and plaudits which hadn’t seen the light of day in years.

Like many great footballers, Papa came from humble beginnings. He grew up in a small village outside Falkirk, called Dunipace . When Papa was five, the family moved to nearby Torwood. A rural hamlet known for its castle ruins, and not much else. There wasn’t even a basic shop for essentials, pub, or football pitch. Yet, there was one place Papa remembered dearly – the local sweet shop. It was only open on weekends, and that gave him enough time to save up his pocket money for some chocolate. He always loved the odd piece of chocolate. Sadly, for his last ever Christmas (2019), I gave him a framed picture of himself and Roberto (my son and his great-grandson) and a big box of chocolate brazil nuts (his favourite). I suppose I’ll never know if he got round to enjoying them.

As a boy, the countryside was Papa’s playground. And it would remain so throughout his life. He lived for the great outdoors, for the hills, exploring, fishing (the first ever fish he caught as a kid was by hand. No joke.), and fresh-air adventures. He was a dedicated rambler, and much-loved member of a rambling club, right up until his 80s. And for me, my cousins, and friends, a weekend at Papa’s meant a long hike (sometimes too long) through Scotland’s scenic splendour, which, being a kid, I took for granted. We’d take fishing rods, a stove for our beans and sausages, a flask of coffee, and a ridiculously heavy tent, which would inevitably fill with bloody midges and I’d want to go home. But midge bites, tired legs and need for civilisation aside – I’ll always cherish those days. Great memories.

His first school, Torward Primary, was a typically rural, small village school stuck bang in the middle of serene, wide open countryside. One classroom. One strict disciplinarian of a teacher, Miss Millar, who’d use a ruler on the back of his hand if his writing was not up to scratch (unfortunately for Papa, like me, his writing was never that legible – thank goodness for computers). And the school taught less than 15 children, aged five to 11 – all in the same room.

There may not have been a pitch as such at the school. And certainly no nets. There weren’t even enough pupils to make a team, but that never stopped Paps and his pals from having a kickabout whenever they could. He remembers these days fondly. Coming from a more privileged background, I’d laugh at how backward it all sounded, but it kind of made it more real. More admirable. It’s like the Scottish version of some Brazilian street kids playing with a make-do ball in their favelas. Well, not quite, but you know what I mean – it added authenticity.

Papa’s passion for football began with regular trips to watch Falkirk with his father (his dad’s favourite team). The football-bug grabbed hold of him pretty quickly. So he would practise at every opportunity – knocking the ball against a wall and then catching it. That said, he never even considered the position of goalkeeper back then. Yet in post-war one Britain – where money and treats were was always scarce – he never had a real ball to play with. Well he did, but it was more a heavy, oddly shaped medicine ball-type-thing that his dad was continually re-patching and pumping up. You can only imagine how cumbersome this thing was, given the size and weight of a normal ball of that time.

Becoming a goalkeeper sort of happened by chance. Papa claims that at weekends and especially on long sunny summer nights football-loving men from neighbouring villages would congregate on grassy areas and use their jackets for posts – as we’ve all done at some time. Papa, being the youngest (about ten) would have no choice on the position he’d play. So the men would simply say “stick the wee man in goal”. So in he’d go. But not reluctantly. He actually enjoyed it.

This leads me to the first photograph I ever saw of Paps in a football strip (he had an amazing wee office at his home where the walls and tables were adorned with football photos, memorabilia, programmes, awards, medals, caps – it was an Aladdin’s cave of when Rangers ruled and you were actually proud of your national team). The photograph was of a very young Bobby in a Larbert Village School strip – the school he attended after Torwood Primary. He played in goal from the very start. And he was good. Really good.

Several years later he was picked to play keeper for the Falkirk and the District Schools team. This might not sound like much now but other players for the team included Hibs’ much-loved Eddie Turnbull; David Lapsley, who captained St Mirren to Scottish Cup success in the late 50s; and George Young, future captain of Rangers and Scotland. Papa went on to win the Scottish Cup with the team 5—0. He was finally getting the recognition he deserved.

Papa’s prowess and unwavering skill as the Falkirk High goalkeeper finally caught the attention of Falkirk FC itself. He started training with the first team and the versatile ex-Rangers (and Celtic) player Tully Craig was interested in signing him full-time. He was in two minds – sign for Falkirk or try for Queen’s Park.

His fate was sealed on Saturday 13 April 1940, when a 17-year-old Bobby Brown played for Queen’s Park against Celtic at Parkhead in a league match. This was the beginning of his senior football career. At the time, Queen’s Park  were highly respected. In the first 20 years of the Scottish Cup, they’d won it ten times. TEN. Not a bad place to begin your career at 17 years old.

But football wasn’t the be all and end all of Papa’s colourful career. He’d always been keen on teaching PE. And in 1941 he took a slight detour from the game to train to become a successful PE Teacher at Jordanhill College in Glasgow –he eventually managed to combine his PE studies with playing for Queen’s Park.

Papa’s days at Queen’s were numbered however. The mighty Rangers FC were on the hunt for a keeper – still considered an ‘amateur’, ‘Wee Bobby’, as he was affectionately known, could potentially be their man.

And when the Second World War ended, it wasn’t just Rangers who were interested. There were many top tier teams, including the mighty Manchester United – Sir Matt Busby held chats with Papa about the prospect. Busby was always close to Papa and while the Man U offer was tempting, Paps was committed to completing his PE training, while continuing to play in Scotland.

It was the iconic Bill Struth, who Papa revered right up to his dying days, who made him a Ranger. On a side note, Bill Struth came up in one of the last conversations I had with Papa (Christmas 2019) – I made a dig at Papa’s always-immaculate dress–sense as he was taking the piss out of mine. Struth’s dapper attire rubbed off on Papa so much that he made sure his own players’ kits were pristine at all times – their socks had to be pulled up, their boots properly laced and as shiny as possible, their shirts tucked into their shorts etc.

As it turned out, he didn’t need much arm-twisting from Struth – for in those days the fee to join Rangers was enormous (ok, nothing like today’s standards but still a healthy sum), one that simply couldn’t be turned down, especially in light of his upcoming marriage to my Mamie – Ruth. Amazingly enough, Bill Struth allowed Paps to continue his PE course while playing part-time at Ibrox (Papa’s father wanted to make sure he had a ‘proper job’ just in case his football dream fell through).

Papa’s and career at Ibrox got off to a brilliant start after Rangers beat Airdrie 4—0 on his debut. And he went from playing in front of unbelievably large crowds of 10,000+ to (nowadays) unheard of crowds of 100,000+. Papa was Ranger’s number one choice from the start, and it wasn’t long before he had a few internationals under his belt, making five appearances for Scotland.

Bobby Brown’s first Old Firm match was at Parkhead and Rangers beat Celtic 3—2. Paps played 296 first-team matches for Rangers – and an incredible 179 in succession. He won five Scottish League Championships, four Scottish Cups and two Scottish League Cups as a blue. But alas, his choice of playing part time began to bother manager Struth, who pestered Papa to quit his PE teaching and play full-time. This wasn’t even an option for Bobby, so he was sadly replaced by George Niven in 1952. Ever resilient, Paps took it on the chin and moved back to Falkirk to become an integral part of the Bairns once more, before retiring from playing altogether two seasons later.

It goes without saying that Papa was a great footballer and gifted goalkeeper. Yet he’ll always be renowned for his remarkable managerial career. A career that began at St Johnstone – he helped get them promoted to the top division in 1963. He managed 393 games for the Saints before being handed the biggest break of his career – Scotland’s national team manager in 1967. Not only that, but he was Scotland’s first full-time manager.

And his managership couldn’t have gotten off to a better start. His first international match was against newly crowned world-cup winners England. Papa duly led his ‘handpicked’ squad (previously the team would be selected by an SFA committee) to victory over the English by beating them 3—2, thus giving Scotland the ‘unofficial world champions’ moniker. But he would never dwell on winning, no matter how big that victory was. Likewise, he never let losing get him down. He had the innate ability to move on in life, rather than sit around feeling either superior or victimised.

The Wembley Wizards game was a dream start to a dream job. And I’ll cherish his stories about it forever. I could reel off a dozen anecdotes about the day, the match, the victory. But I won’t. I’d never do it the justice Paps would. The wit and passion he’d exude. It was a landmark in Scotland’s football history that may never be repeated. And it’ll go to his grave with him.

Papa will be eternally remembered for that game. They were the Wembley Wizards after all. It was perhaps Scotland’s greatest ever footballing win – and may forever remain so. For his lifetime’s achievement, Papa was inducted into the Rangers FC Hall of Fame and the Scottish Football Hall of Fame in 2015 – an immense honour for an incredible guy.

Dearest Papa, your family, friends and fans will miss you dearly.